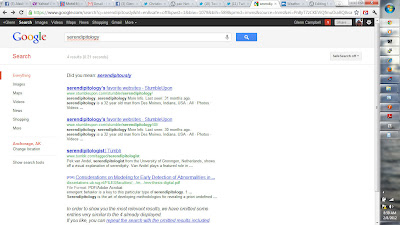 According to Google, the sole preexisting reference to "serendipitology" used as a word appears in a 2007 computer science thesis by Martijn van Veelen in the Netherlands: Considerations on Modeling for Early Detection of Abnormalities in Locally Autonomous Distributed Systems.

Serendipitology is the art of developing methodologies for revealing a priori undefined abnormalities. Serendipitology includes systematic approaches in pursuit of effective intuitive methods

Um, I guess that's an accurate definition, but the author didn't go anywhere with it. It's like the Vikings discovering America before Columbus. They don't get the credit because they didn't make a website!
Posted by Glenn Campbell at 7:47 AM

Birth of a New Word!

On February 8, 2012, I invented a new word: "serendipitology". This short blog is a record of that birth. Here you will find a few of the basic concepts of this new field of study, but they will be explored in more detail elsewhere.
For a newer explanation, see this entry in my other blog: Serendipititology: The Art of Unexpected Good Fortune